Creating an educational setting is a specific and sensitive task. Merging children’s safety and learning optimization requirements with an aesthetic appeal and solid concept can birth some of the most beautiful unique projects around. One configuration we see quite often is the elliptical or circular school. 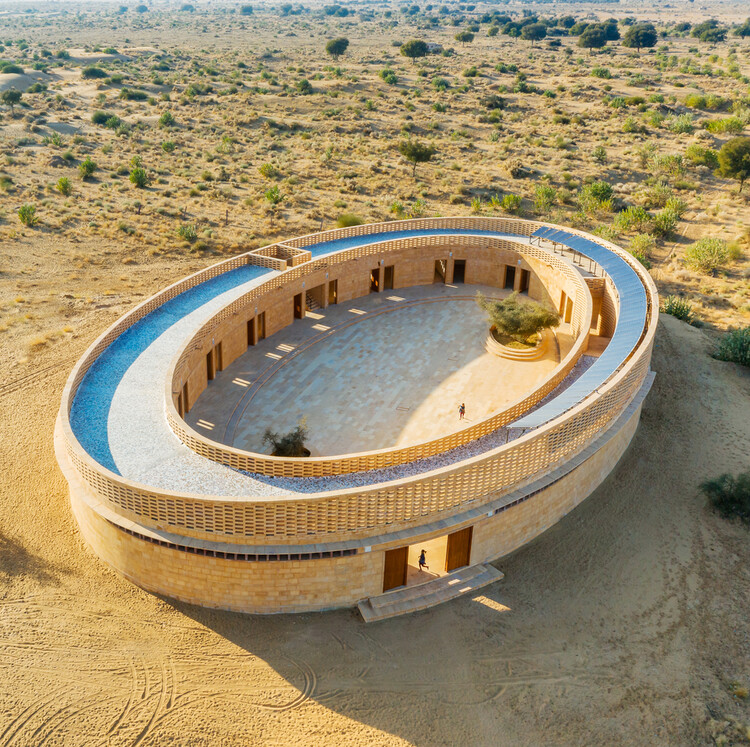 A circular, more specifically ringlike educational setting can suggest a sense of protectiveness and safety with the construction of the embracing surrounding membrane. It is also a practical setup that envelopes multiple functions while linking them, consequentially allowing interactive instances through the central courtyard.

Through many projects, this design has proven to facilitate and promote play for students acting as a running track and continuous recreational path that is still visible to the supervising eye. Another remarkable trait is the recurrence of this design in rural settings, allowing a versatile use of the space for communal instances, acting as an amphitheater that brings together town members.

The circular form of the schoolyard and the way classes are arranged formed with the focal concept of education, meaning “learning together”- void of hierarchical systems and in a democratic style. The rotation of the class layout while connecting them on their corners allows for air circulation between the classes and produces small secondary yards for doing some group work and outdoor activities. Consequently, with this spatial diagram, we gained a central primary yard in the middle of the school as an assembly point for school children and village residents, a circular space around classes and between the thick penetrated wall and classrooms, as well as private yards.

The oval shape allows for easy circulation between classrooms, allowing the school’s few teachers to move quickly between classes. The variation of the perimeter walls in terms of height and proximity to one another creates a wide variety of sections and experiences throughout the building.

Creating a sort of autonomous ‘village’ condition, the radial layout of classroom modules wrap around a central public courtyard. This configuration not only creates privacy from the main public domain, it also shelters and protects the inner courtyard from wind and dust. An ampitheater-like condition at the center of the courtyard will accommodate informal gatherings as well as formal assemblies and celebrations for the school and community as a whole.

Initial idea was to have a continuous set of curves for a compound wall, arranged in a configuration to achieve classroom inside and play areas outside. This curve would act as an unending canvas for writing. It further got developed as a single curve wall instead of several small curves that ensured the utilization of space for communal activities too. This origination would also respond to the existing hexagonal classroom providing connectivity and ease in movement.

Since the GYAAN Center is designed by a woman for women, Kellogg looked at feminine symbols across cultures when starting the design process — specifically symbols of strength, landing on a structure of three ovals to represent the power of femininity and infinity, as well as replicate the planes of the sand-dunes in the region of Jaisalmer.

The circle as an educational space to generate a flexible space assent to the Montessori philosophy that fosters the personal development of each student.

The elliptical roof of Yoshino Nursery School, with graceful curves that touch the ground only at its very southern end, echoes that of the Shimokita coastline. At the ground-level point, it is possible to step onto the roof and climb to the top.

Note: The quoted texts are excerpts from the archived descriptions of each project, previously sent by the architects. Find more reference projects in this My ArchDaily folder created by the author.